In the wake of the London bombings, we are forced again to confront this most uncomfortable question:
Do the Islamic fundamentalist terrorists truly represent a marginal minority among Muslims worldwide?
Or is the term “Islamic fundamentalist” really just a redundancy?

I am by no means an expert on Islam. But since 9/11, and countless terrorist incidents since, I have been patiently awaiting evidence that the majority of Muslims worldwide repudiate the premises and tactics of Islamic terrorists.

Well, I’m still waiting. And there comes a time when one must finally draw conclusions, however painful, from the facts presented.
If there really is some sort of ongoing war between “extremists” and “moderates” for the soul of Islam, it appears to be one of the quietest contests in the history of ideological warfare.

Whatever the ancient history of Islam, in distant days when more enlightened thinkers and civilized rulers prevailed, I see precious little evidence that these sorts represent any significant part of contemporary Muslim thinking or leadership. If they do, they certainly haven’t been very vocal, or active, about rooting out the terrorists in their midst and repudiating their views.

When a supposedly Christian fundamentalist nutcase, Eric Rudolph, bombed U. S. abortion clinics and gay nightclubs, he was forced to live a marginal, virtually reclusive life hiding in a remote rural area.
Not so Muslim terrorists, who arise from even the upper classes of Muslim nations by the tens of thousands, and find vast social infrastructures of sympathizers — including governments — throughout the Islamic world, eager to shelter, support and protect them.

Where do we see remotely comparable numbers of religious terrorists quoting Confucius? Where are all the Buddhist terrorists? Or Christian, Jewish and Hindu car-bombers? Why, in nation after nation, bloody incident after bloody incident, do we find that those responsible for civilian massacres have been almost invariably nurtured on this so-called “religion of peace”?

Where, then, does the global Islamic community really stand on the issue of violence against civilians and non-believers? Inquiring minds want to know. No — demand to know. Noted New York Times columnist Thomas Friedman, certainly no right-winger, is only one of the latest to call upon Muslims to clean up their own stables.

Will they, though? How many years, and how many more bloodbaths, will it take? And how long do we in the West patiently tap our feet, waiting for such reforms in the absence of any visible signs that they are taking place? Don’t we have a right at some point to pronounce judgment on the Islamic culture itself?

And has that point now come? or even long since passed?

Among Western cultured classes, it is, of course, considered bad form to even ask such questions. Such words smack of (shudder!) intolerance — intolerance being the only thing intolerable to moral relativists. Let Muslim fanatics shoot babies, bomb nightclubs and buses and subways, chop off the heads of Red Cross nurses, hijack civilian airliners and ram them into civilian office buildings…and their immediate (and only) response is to wail: “How did we drive them to these desperate acts?” Let the victims demand violent retribution, however, and their immediate (and indignant) response is: “Warmongers!”

This moral inversion is fueled by toxic philosophy. Thanks to a long gray line of ideological dope-pushers, Western intellectuals, politicians and cultural leaders are addicted to the self-destructive hallucinations of moral relativism, altruistic self-sacrifice, cultural self-loathing and political appeasement of sworn enemies. Self-blame, along with cowardly calls for more “understanding” and “restraint,” are their only knee-jerk responses in the face of each new outrage.

I wrote about this moral bankruptcy right after 9/11, in an essay titled “Unilateral Moral Disarmament.” Sadly, not a thing has changed since I penned those scalding words, which I cite in part for your consideration:

No giants toppled the towers of our greatest city, nor drove a metal stake into the heart of our military’s command center. No, these atrocities were performed by virtually unarmed, hate-driven midgets, motivated by a philosophy of destruction.

Their only power was what we willingly granted them, in large measure because of our own mixed philosophical premises. Our feelings of impotence, confusion and vulnerability are testaments not to the terrorists’ strength, but to the ideas that have undermined our own determination, power and will to resist them.

More recently, this past May, Bruce Thornton offered his own quite similar assessment of Muslim culpability — and cowardly Western “tolerance” — in a brilliant essay titled “Suicidal Tendencies in the West.” He closes thus:

Increasingly we Westerners resemble the Eloi of H.G. Wells’ The Time Machine, beautiful, gentle, highly civilized hedonists whose fate is to be devoured raw by the brutal Morlocks. We are the beneficiaries of a culture created by those before us who forged European civilization in the fires of resistance to Islamic jihad: in Spain, in Sicily, in Eastern Europe, in Greece — the plunder, rape, slaughter, massacres, sacks, kidnapping, and enslavement perpetrated by the armies of Allah were for centuries fought by those whose names now most Westerners have forgotten or would be embarrassed to claim as their own. Don John, Charles Martel, Leo the Isaurian, Prince Eugene, Montecuccoli, Andrea Doria, El Cid, Sobieski, Charlemagne, Suvorov, Boucicaut, Hunyadi, Fernando II of Castile, Alfonso I of Aragon, Guiscard, Harold Hardrada — who among us knows anything about the men who fought and killed so that Europe, and Europe’s offspring America, today looks like Europe and America instead of looking like Saudi Arabia, Pakistan, or Syria?

Because of the brutal violence of those warriors against jihad, we in the West today enjoy the luxury of cynicism, cheap irony, effete tolerance, and hedonism. We moral dwarves stand on the shoulders of those giants and spit on their heads, thinking our ingratitude is really an intellectual sophistication superior to the primitive superstitions and naïve ideals that have made our lives of freedom and prosperity possible. Meanwhile jihad by other means — demography, immigration, terrorism, the oil weapon — continues apace, at least until the time when a nuclear, chemical, or biological weapon falls into the hands of a modern jihadist and we are returned to the sort of slaughter our ancestors suffered for centuries. Maybe then we’ll wake up.

Will it take that? Must an entire American city lie in flaming ruins, or its population lay dying in the streets from some plague, before we get serious?

In the wake of the London atrocities, there is no time left to mince further words. Or actions. We must begin to place blame where it is due, and respond accordingly. It is time to hold the Muslim world to account for — at the very least — condoning the monsters in their midst. It is time for us to reiterate to them the words of moral clarity that President Bush uttered in the smoking aftermath of 9/11: “Either you are with us, or you are against us.”
And to show them, in blunt action, that we really do mean business. 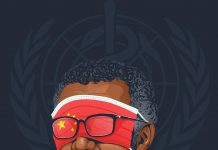 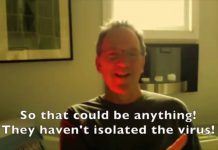 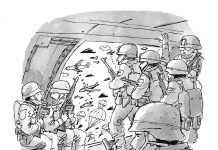 "The rights of every man are diminished when the rights of one man are threatened."
John F. Kennedy