Neil Lock:
A hundred and twenty or so lovers of freedom met in Gummersbach, Germany in July, for the World Freedom Summit. It was also the 24th annual conference of the International Society for Individual Liberty and Libertarian International.

Many of the usual ISIL stalwarts were there. But, as always, it was nice to
meet some new faces. And there was a good attendance of students, many of them from Eastern Europe.
As we were entertained and edified by a variety of distinguished speakers, it became plain that there were many themes running through this year’s conference. One was the economic future of Europe, a subject on which many were optimistic. France and Germany are in such a mess, that major reforms are inevitable. And the newer, more dynamic members of the EU look set for strong growth.

Another theme was globalization. Here again, the pundits think we may be
winning. Not only is a globalizing economy helping to spread “the capitalist
peace”. But tax competition looks set (albeit far too slowly!) to drive tax rates downwards.

A third theme was Africa. I will mention only one speaker by name, June
Arunga from Kenya. What June gave us was a deeper understanding of the problems. There is in Africa a widespread culture in which bullying people is considered, not just OK, but even normal. This explains why African governments routinely suppress their people’s economic progress, and why wars and genocides are always a threat. To solve the problems in Africa, what we need is not to throw good aid money after bad, but to change the culture.

We did not forget, also, that 2005 is the centenary of Ayn Rand’s birth. We
celebrated her life in words, as well as in an enormous birthday cake.

As at any conference, there were a few minor adversities, such as last-minute withdrawals of speakers, (Barbara Branden and Sabine Herold, (due to illness), failure of the Internet connection, and late opening of the bar. But Jim Peron and the other organizers coped manfully, and never lost their sense of humour. So, a good time was had by all. 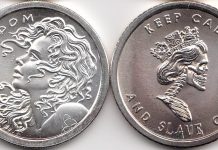 "Government, in it's last analysis, is organized force."
Woodrow Wilson