Breaking News:
Scientists call on UN Climate leaders to admit they are wrong and renounce Global Warming claims and ‘devastating policies’
Please circulate as widely as possible, thank you

The UN’s Climate Committee leadership and policies were today challenged by four scientists, including one Nobel Peace Prize winner, from around the world to admit that CO2 centred Global Warming theories are now disproved by observations and to renounced that theory and associated ‘devastating policies’ which are weakening the world economy and increasing food shortages and destruction of forest across the planet.

Their bombshell letter (below and pdf attached) includes a graph by Joseph D’Aleo, (Certified Consultant Meteorologist, Fellow of the American Meteorological Society (AMS), and Executive Director Icecap.us)
based entirely on official figures which shows that while CO2 has risen dramatically for the last ten years world temperatures have been falling contrary to the UN (IPCC) predictions.

The writers directly challenge the IPCC to produce observational evidence for the UN’s CO2 driven Global Warming theories which are now being used to justify anti-CO2 measures and taxes all over the world: “If you believe there is evidence of the CO2 driver theory in the available data please present a graph of it” the scientists challenge.

Media are welcome to publish the graph and letter and extracts therefrom.

Dear Dr. Pachauri and others associated with IPCC

We are writing to you and others associated with the IPCC position – that man’s CO2 is a driver of global warming and climate change – to ask that you now in view of the evidence retract support from the current IPCC position [as in footnote 1] and admit that there is no observational evidence in measured data going back 22,000 years or even millions of years that CO2 levels (whether from man or nature) have driven or are driving world temperatures or climate change.

If you believe there is evidence of the CO2 driver theory in the available data please present a graph of it.

We draw your attention to three observational refutations of the IPCC position (and note there are more). Ice-core data from the ACIA (Arctic Climate Impact Assessment) shows that temperatures have fallen since around 4,000 years ago (the Bronze Age Climate Optimum) while CO2 levels have risen, yet this graphical data was not included in the IPCC Summary for Policymakers (Fig. SPM1 Feb07) which graphed the CO2 rise.

More recent data shows that in the opposite sense to IPCC predictions world temperatures have not risen and indeed have fallen over the past 10 years while CO2 levels have risen dramatically.

The up-dated temperature measurements have been released by the NASA’s Microwave Sounding Unit (MSU) [1] as well as by the UK’s Hadley Climate Research Unit (Temperature v. 3, variance adjusted – Hadley CRUT3v) [2]. In parallel, readings of atmospheric concentrations of CO2 have been released by the Mauna Loa Observatory in Hawaii [3]. They have been combined in graphical form by Joe D’Aleo [4], and are shown below. 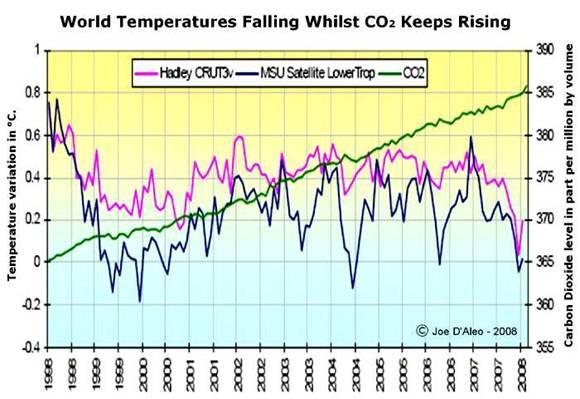 These latest temperature readings represent averages of records obtained from standardized meteorological stations from around the planet, located in both urban as well as rural settings. They are augmented by satellite data, now generally accepted as ultimately authoritative, since they have a global footprint and are not easily vulnerable to manipulation nor observer error. What is also clear from the graphs is that average global temperatures have been in stasis for almost a decade, and may now even be falling.

A third important observation is that contrary to the CO2 driver theory, temperatures in the upper troposphere (where most jets fly) have fallen over the past two decades. [Footnote 2]

IPCC policy is already leading to economic and unintended environmental damage. Specifically the policy of burning food – maize as biofuel – has contributed to sharp rises in food prices which are causing great hardship in many countries and is also now leading to increased deforestation in Brazil, Malaysia, Indonesia, Togo, Cambodia, Nigeria, Burundi, Sri Lanka, Benin and Uganda for cultivation of crops [5].

Given the economic devastation that is already happening and which is now widely recognised will continue to flow from this policy, what possible justification can there be for its retention?

We ask you and all those whose names are associated with IPCC policy to accept the scientific observations and renounce current IPCC policy.

Footnote 1: Two heavily publicised quotations which emerged from your organisation, respectively in February and December last year, are:

The 2007 IPCC report, compiled by several hundred climate scientists, has unequivocally concluded that our climate is warming rapidly, and that we are now at least 90% certain that this is mostly due to human activities. The amount of carbon dioxide in our atmosphere now far exceeds the natural range of the past 650,000 years, and it is rising very quickly due to human activity. If this trend is not halted soon, many millions of people will be at risk from extreme events such as heat waves, drought, floods and storms, our coasts and cities will be threatened by rising sea levels, and many ecosystems, plants and animal species will be in serious danger of extinction. (Summary statement, Bali Conference.) [7].

Footnote 2: “Data over the past two decades indicates that temperatures have actually declined in the upper troposphere, even though there has been some minor upward trends in temperature at sea level and lower altitudes. This completely contradicts conventional global warming models. Before we radically rearrange the political economy of the world because some scientists claim anthropogenic CO2 is the cause of climate change, it might be worthwhile for anyone taking a position on the topic to consider whether or not this is indeed “well settled science.” Dr. Richard Lindzen, MIT, March 2008. 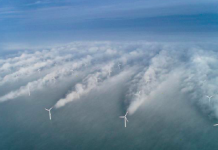 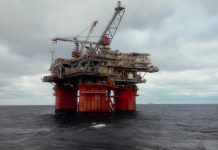