As I recover from Election Day and my US Senate campaign that preceded it, it is time to take stock of where the Libertarian Party stands and what we accomplished in the election season just passed.

First, I think Bob Barr and Wayne Allyn Root were outstanding candidates that represented the ideas of individual liberty in an exemplary manner.  There was not a single time that I saw them on television or looked at their Web sites where my reaction wasn’t, “Right on!”  They represented our message of individual liberty and responsibility in an outstanding fashion, and I want to thank them for that.  I also have personal knowledge of diligently the campaign staff worked-Russ Verney, Shane Cory, Mike Ferguson, Andrew Davis (on loan from LPHQ) and others.  Thank you for dedication to the effort in the face of many challenges that were outside the control of any of us.

Two of our candidates for office earned over 1,000,000 votes.  They were John Monds, who ran for Public Service Commission, District 1, in Georgia.  His was a two-way statewide race (even though he going to represent a particular district).  Also, William Bryan Strange polled a seven-digit number of votes for Judge of the Court of Criminal Appeals, Place 9, in Texas, in another two-way statewide election.

We came out of the 2008 election with ballot access for the presidential ticket in 27 states-the same number as at the end of the 2004-and more than any other minor party.  However, one of those states that we gained was North Carolina, where Duke University professor Michael Munger earned nearly 3 percent of the vote for Governor, qualifying the Libertarian Party of North Carolina for the ballot for the next four years.  That alone will save the LP about $200,000 in ballot access expenses-not to mention that it will allow more LP candidates to run for office over that period.  We also achieved major party ballot status in Massachusetts, while we lost it in South Dakota.

Even though some people reregistered Republican to vote for Ron Paul in the presidential primaries, the number of voters registered LP nonetheless increased from 225,229 in February 2008 to 243,293 in October 2008.  (Those numbers are from the 23 states that allow voters to register Libertarian and that report those numbers.)

The sustaining membership (those giving at least $25 over the past year) of the LP also increased; it is up over 22 percent from this time last year.

There is indisputably much that was accomplished this year for which we can all be proud.

However, our victories in 2008 not withstanding, the work of the Libertarian Party never ends.  The battle for ballot access begins as soon as it ends, and we have no time to waste to keep the ball rolling.  With ballot access, we need to do as much as we can, as soon as we can-to get it done and to get it done as efficiently as possible.  Last minute fire drills greatly increase petitioning costs and risk not making the ballot at all.

How can you help with ballot access?  First, donate to the Libertarian Party. You can do this at https://www.lp.org/contribute, or mail your donation to the Libertarian Party at the address noted on the front page of this newspaper.  Your contribution of $25, $50, $100 or $1,000 will be used to begin the next cycle of ballot drives as absolutely soon as possible.

Also, please sign up for email announcements at LP.org to stay up to date on our ballot access projects.  Even if you cannot help fund our drives with a donation, we could use your volunteer help collecting signatures where these drives will occur.  Every volunteer signature means one less paid signature, and the savings add up.

Thank you for all your support of our candidates in 2008.  Because of your efforts, the candidates of the Libertarian Party received more than 13 million votes! This is a record for the Party, and it is all due to our wonderful donors, volunteers and candidates across the country.  I emphatically thank you all. 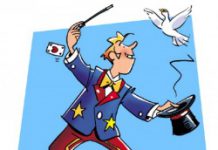 "Government does not grow by seizing our freedoms, but by assuming our responsibilities."
Michael Cloud