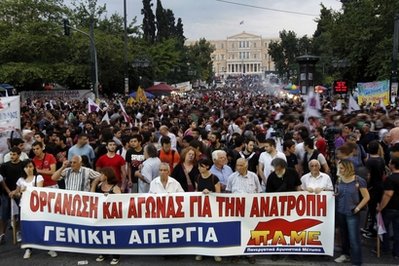 Protesters from a communist-backed union protest near the Greek Parliament seen in the background during an anti-austerity protest in Athens, that several thousands people took part in on Friday, June 3, 2011. Greece is poised to receive the next installment of its bailout facility, and will likely get further rescue loans to prevent it from defaulting on its massive debts, European officials said Friday. The banner reads “general strike” .(AP Photo/Petros Giannakouris)

"They have gun control in Cuba. They have universal health care in Cuba. So why do they want to come here?"
Paul Harvey 8/31/94