Excerpt: The IPCC prediction of global temperatures 1° F warmer by 2011 and 2° F by 2038 stand little chance of being correct. […] In a Geological Society of America abstract, Dr. Don Easterbrook, Professor of Geology at Western Washington University, presents data showing that the global warming cycle from 1977 to 1998 is now over and we have entered into a new global cooling period that should last for the next three decades.
He also suggests that since the IPCC climate models are now so far off from what is actually happening that their projections for both this decade and century must be considered highly unreliable.

The Pacific Ocean has a warm temperature mode and a cool temperature mode and in the past century has switched back forth between these two modes every 25-30 years (known as the Pacific Decadal Oscillation or PDO). In 1977 the Pacific abruptly shifted from its cool mode (where it had been since about 1945) into its warm mode, and this initiated global warming from 1977 to 1998. The correlation between the PDO and global climate is well established.

The announcement by NASA’s Jet Propulsion Laboratory that the Pacific Decadal Oscillation (PDO) had shifted to its cool phase is right on schedule as predicted by past climate and PDO changes (Easterbrook, 2001, 2006, 2007). The PDO typically lasts 25-30 years and assures North America of cool, wetter climates during its cool phases and warmer, drier climates during its warm phases.

The establishment of the cool PDO, together with similar cooling of the North Atlantic Oscillation (NAO), virtually assures several decades of global cooling and the end of the past 30-year warm phase. It also means that the IPCC predictions of catastrophic global warming this century were highly inaccurate. Switch of PDO cool mode to warm mode in 1977 initiated several decades of global warming. The PDO has now switched from its warm mode (where it had been since 1977) into its cool mode. As shown on the graph above, each time this had happened in the past century, global temperature has followed.
The upper map shows cool ocean temperatures in blue (note the North American west coast). The lower diagram shows how the PDO has switched back and forth from warm to cool modes in the past century, each time causing global temperature to follow. […]

Comparisons of historic global climate warming and cooling over the past century with PDO and NAO oscillations, glacial fluctuations, and sun spot activity show strong correlations and provide a solid data base for future climate change projections. 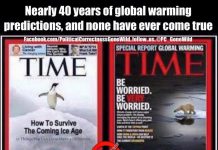 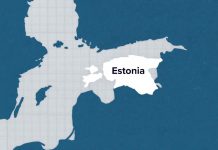 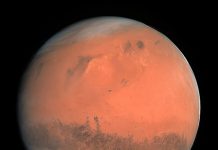 "Blessed are the young, for they shall inherit the national debt."
Herbert Hoover